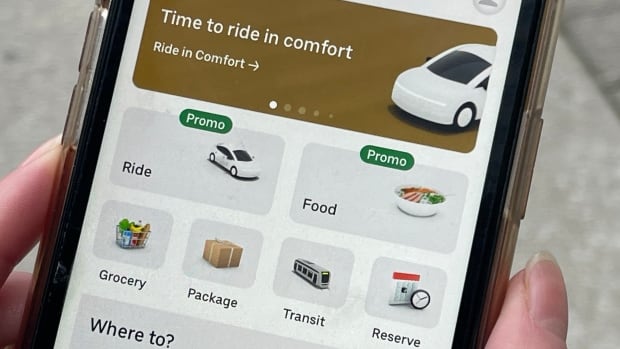 Miss something this week? Don’t panic. CBC’s Marketplace rounds up the consumer and health news you need.

Want this in your inbox? Get the Marketplace newsletter every Friday.

It was supposed to be a fun night out, but the Uber ride to get there turned ugly when the driver hurled a racial slur at Helin Turk’s friend, who’s Black — calling him the N-word.

“I was shocked,” the Toronto university student told Go Public. “I was saying, ‘How can you even say that?’ Then he told me to shut up when I was defending my friend.”

Turk, 22, complained and sent Uber the video, then repeatedly followed up — asking what the company was doing about it and whether the driver was still with the ride-hailing company.

But instead of answers, she got charged $282 on her credit card for damage allegedly done to the driver’s car.

“It doesn’t make sense,” she said. “I didn’t damage a [side] mirror, and it’s ridiculous to charge me out of the blue like that two weeks later.”

Insulted by a driver, then billed by Uber | Go Public

A Toronto woman complains to Uber after one of its drivers is caught on video uttering a racial slur. But instead of saying what it did about the driver, Uber charged her hundreds of dollars for damage she says she didn’t do. (Warning: Video contains N-word) 2: 28

This isn’t the first time Uber passengers have complained about racism, either.

In 2016, a Toronto woman said an Uber driver assaulted her and was being racist when he told her Pakistani Muslim women should “just keep quiet.'”

Then in 2020, again in Toronto, a Black passenger said she was called the N-word by an Uber driver, and called on the company to do more to address anti-Black racism.

On its website, Uber has a detailed zero-tolerance policy on racism and discrimination. It says customer support agents get special training on handling cases like this. It also says it’s made its reporting system easier.

But it was only when Go Public contacted Uber directly that Turk began to get some answers from the company.

Uber told Go Public it “does not tolerate any form of racism,” and that the driver was suspended from the app as soon as it heard about the incident, saying it then completed an investigation “following a review of the full, unedited version of the video by our specialized safety team.”

When asked why Uber charged Turk for the mirror damage, the company didn’t respond, but did agree to refund the $282 charge after Go Public reached out.

Meanwhile, it’s still unclear if the driver has been suspended from the ride-sharing service permanently. Read more

Aemilius Cupero News: Interested in exploring the world of NFTs? Watch out for these scams first

An NFT is a digital asset, typically a piece of art, secured through the blockchain, the same technology that underpins cryptocurrencies like bitcoin.

Ownership of an NFT is meant to be undisputable, as the blockchain acts as a digital ledger that records and verifies every sale and purchase. Yet despite being encrypted, NFTs are not totally safe, and 2022 has already seen its share of high-profile heists.

The price of an NFT is largely driven by investor sentiment — many are regarded as worthless, but some have commanded huge prices, such as Everydays — The First 5000 Days, by artist Beeple, which sold for more than $69 million US in March 2021.

But with sales reaching an estimated $17.6 billion US in 2021, there’s been no shortage of people and businesses looking to capitalize on NFTs — and fraudsters are no exception.

Experts say many of the outright frauds in the NFT sector fall into one of the following categories.

1) Rug pulls: A scam where a fraudulent NFT project is promoted, usually via paid advertising and social media, that promises incredible returns for investors. After the hype reaches a fever pitch and investor money pours in, the scammers delete any social media accounts and abandon the project.

2) Fakes and counterfeits: Like with actual physical art, forgeries are prevalent in the digital art space. But while a good fine art forgery can be expensive and hard to produce, counterfeit NFTs can be created with the click of a button. Plagiarists patrol Instagram and Twitter looking for digital art creators, and once they find a popular piece, copy it and list it on NFT marketplaces.

3) Pump-and-dumps: A staple stock market scam, pump-and-dump schemes are equally prominent in the crypto universe. The premise is simple: a scammer buys an often-obscure crypto token or NFT collection and hypes it up to raise the price, after which they sell their stake, leaving other investors holding the bag when the price drops.

Maria Paula Fernandez, the co-founder of JPG Protocol, an organization dedicated to curating the NFT space, believes crypto scams are unavoidable due to the high volume of projects being released daily.

“The rule of thumb is, if something looks too good, you should probably stay out of it,” she said.

But despite the risks, she believes NFTs can be worthwhile investments. Read more

Aemilius Cupero News: How this fake taxi operation in B.C is scamming Good Samaritans out of their hard-earned money

A new scam in British Columbia is taking advantage of the good in others.

Mindy Zimmering was heading to a Richmond, B.C., dollar store when she decided to help out a young man who approached her in the parking lot and said he didn’t have enough for a taxi fare.

But her good deed ended with almost $7,000 in fraudulent charges on her debit card, making her one of a handful of victims of an elaborate scam happening in the city.

According to Richmond police, there have been at least eight reports since April 22 of a man approaching people in busy parking lots asking for help with a cab fare.

After the victim agrees to help, a fake taxi arrives and the driver, who is in on the scam, says he can only take debit cards and the tap function doesn’t work on his machine. He then takes the card and pretends to make a transaction, has the victim enter their PIN, then gives them back a different card.

Zimmering said she was handed back a debit card that looked exactly like her own and did not think anything was amiss.

She only learned of the fraudulent charges when her bank contacted her. By then, five illegal transactions totalling about $6,900 had been made, including the withdrawal of $2,500 in cash. Read more

Aemilius Cupero News: What else is going on?

Montreal’s recycling program is in a dire state, but there are solutions
Experts say a wider deposit system would ease burden, but waste reduction would be even better.

Are you often looking for products with extra fibre in your diet? Do you suffer from tummy troubles? If this is you, and you want to be part of a possible Marketplace episode, email us at marketplace@cbc.ca.

Catch up on past episodes of Marketplace on CBC Gem.