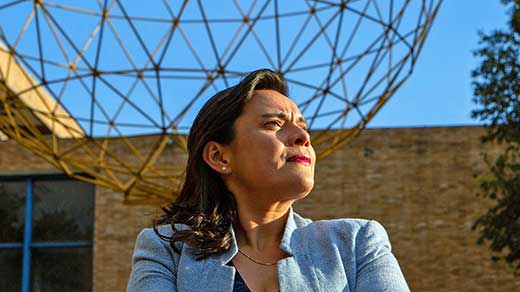 In Search of Cracks in Albert Einstein’s Theory of Gravity 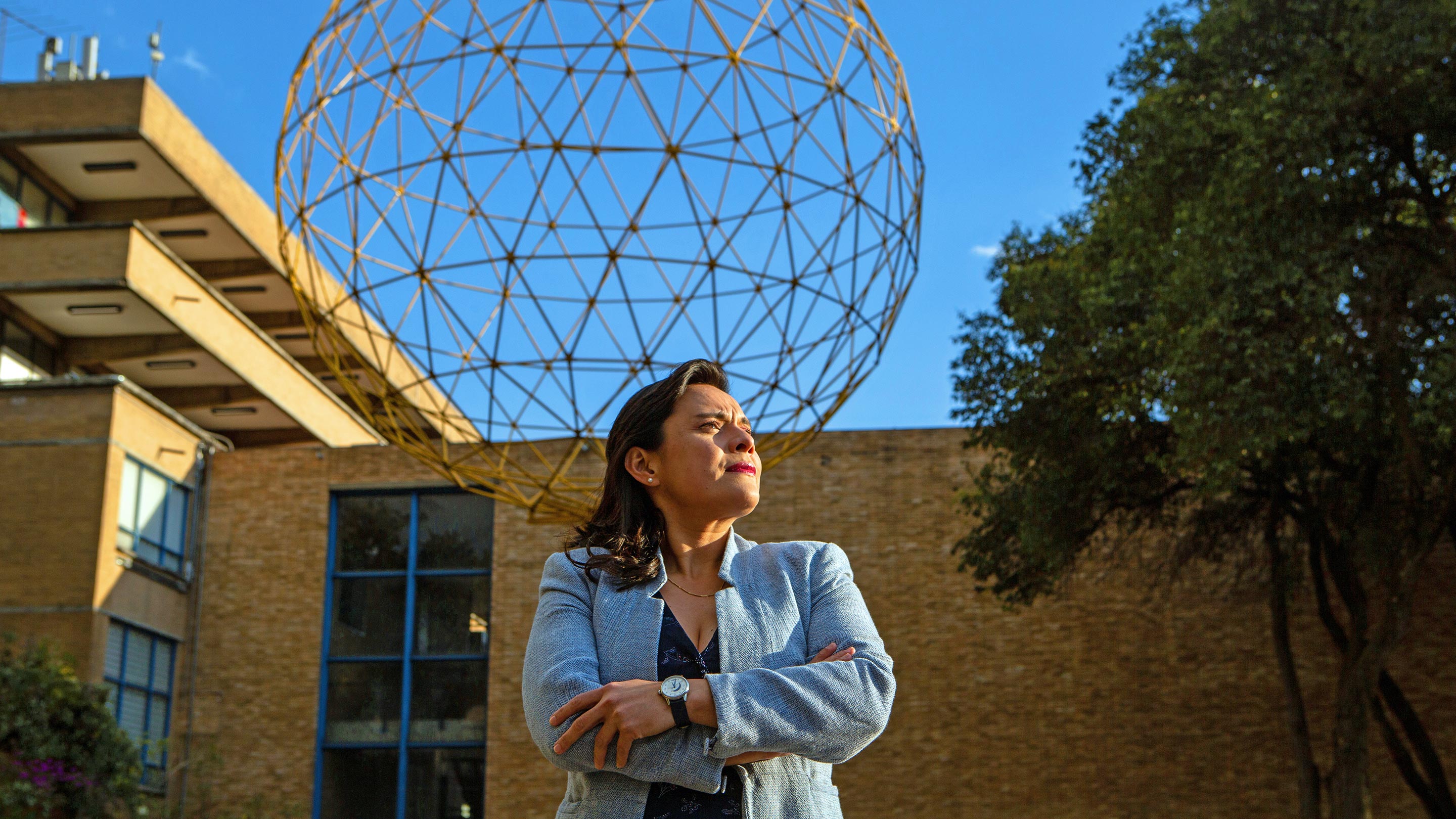 Celia Escamilla-Rivera leads the department of gravitation and field theory at the National Autonomous University of Mexico.

During a solar eclipse in 1919, Arthur Eddington observed light bending around the sun just as predicted by general relativity, Albert Einstein’s new theory of gravity. Since then, general relativity, which says that massive objects like stars warp the fabric of space-time around them, has passed increasingly precise tests. A year rarely goes by without a new experiment or observation confirming Einstein’s theory. But there’s a hitch.

Invisible substances known as dark matter and dark energy seem to make up some 95% of the content of the universe. The working assumption is that dark matter consists of nonluminous elementary particles, and that dark energy is the energy of space itself. But it’s also possible that they are illusions that appear because gravity works differently from how Einstein thought about it. “We’re invoking these mysterious things,” said the cosmologist Celia Escamilla-Rivera.“I am strongly convinced that alternative theories of gravity are needed.”

Escamilla-Rivera is searching for another, more complete theory. A bewildering array of alternatives to general relativity have been put forward over time, from “teleparallel gravity” to “complex quintessence” and “negative-mass cosmology,” but they long seemed like theoretical fancies. With cosmologists unable to create experiments that can distinguish these theories from general relativity, the ideas have gathered dust.

According to Escamilla-Rivera, that’s beginning to change in this new era of precision cosmology, a field she is pioneering in her home country of Mexico. Precision cosmology combines large and diverse data sets with new statistical methods, machine learning and supercomputers. “Thanks to this data you can open a door and classify all these theories and say which ones work and which ones don’t,” she said.

Escamilla-Rivera grew up in Ciudad del Carmen, a city on a small island in southern Mexico. She remembers walking along the beach at night under a full moon at age 4, wondering: Why is the moon very round? And why does it only come out at night? “I thought I needed to become an astronaut,” she said.

Years later, watching one of her university professors compute the age of the universe directly from Einstein’s equations, she switched her focus to cosmology. “People were like: ‘Why do you want to be a cosmologist? These are careers for people in the United States,’” she said. “It was seen as very weird.”

Escamilla-Rivera completed her doctorate in Europe and the United Kingdom; then, at 29, she was invited back to Mexico to run the theoretical physics department of the Mesoamerican Center for Theoretical Physics. A few years later, she became the first woman to hold a research position in the department of gravitation and field theory at the National Autonomous University of Mexico (UNAM) — as the head of the department.

We spoke for four hours over Zoom. From her office at UNAM in Mexico City, Escamilla-Rivera exuded confidence and enthusiasm, not only about the potential of precision cosmology to overturn Einstein, but also about new prospects for cosmologists in Mexico. The interview has been condensed and edited for clarity.

General relativity and the standard model of cosmology that grew out of it work so well. Why do you think we need to modify or extend gravity?

The problem is that general relativity is not general enough. If you want to explain dark energy, this invisible energy that seems to be accelerating the universe’s expansion, you need an extra component in the equation, called the cosmological constant. This extra component doesn’t exist naturally in general relativity; you need to add it by hand.

Is there a theory that naturally can give you dark energy without invoking mysterious things? That’s why I’m working on these extended or modified theories of gravity.

Other than dark energy, what other puzzles could these theories solve?

General relativity explains a lot about nature, but it doesn’t explain what happened at the Big Bang, or what happens inside black holes. The singularity of a black hole is mathematically very similar to the Big Bang singularity — it’s a point where all the known laws of physics break. A big question is, if we modify or extend general relativity, maybe we can explain this bizarre point that breaks everything.

General relativity also doesn’t explain the future of the universe. There are interesting theories that say the universe is going to collapse again into another Big Bang, called the Big Crunch universe. But we don’t know because general relativity is incomplete. If we find a complete theory, we could get answers to these kinds of questions.

There’s broad agreement that a fundamental, quantum theory of gravity is needed to describe black hole interiors and the Big Bang. The usual assumption, though, is that quantum gravity looks like general relativity throughout the rest of the universe. But you think a different theory will work better everywhere. Can you give an example of how modified theories differ from general relativity?

So it behaves a bit like the cosmological constant in general relativity?

Exactly. Except that in this scalar-tensor theory you don’t add anything, it comes out of the mathematics.

This is not the only alternative. In the 1980s, there was an explosion of these modified-gravity theories. Mathematically these theories are very rich, nothing can stop you, but with so many theories at hand, we were limited by experiments to tell them apart.

Is this what led you into precision cosmology?

When I was awarded my Ph.D., in 2014, that year was the explosion of precision cosmology in Europe. Ten years ago, the standard process was to take a telescope and make observations; with this data you then tested your theory. What happens now is that we have many telescopes collecting data of different types, from different parts of the universe. With machine learning, neural networks and supercomputers we can process all this data together. That makes the test of a theory richer. 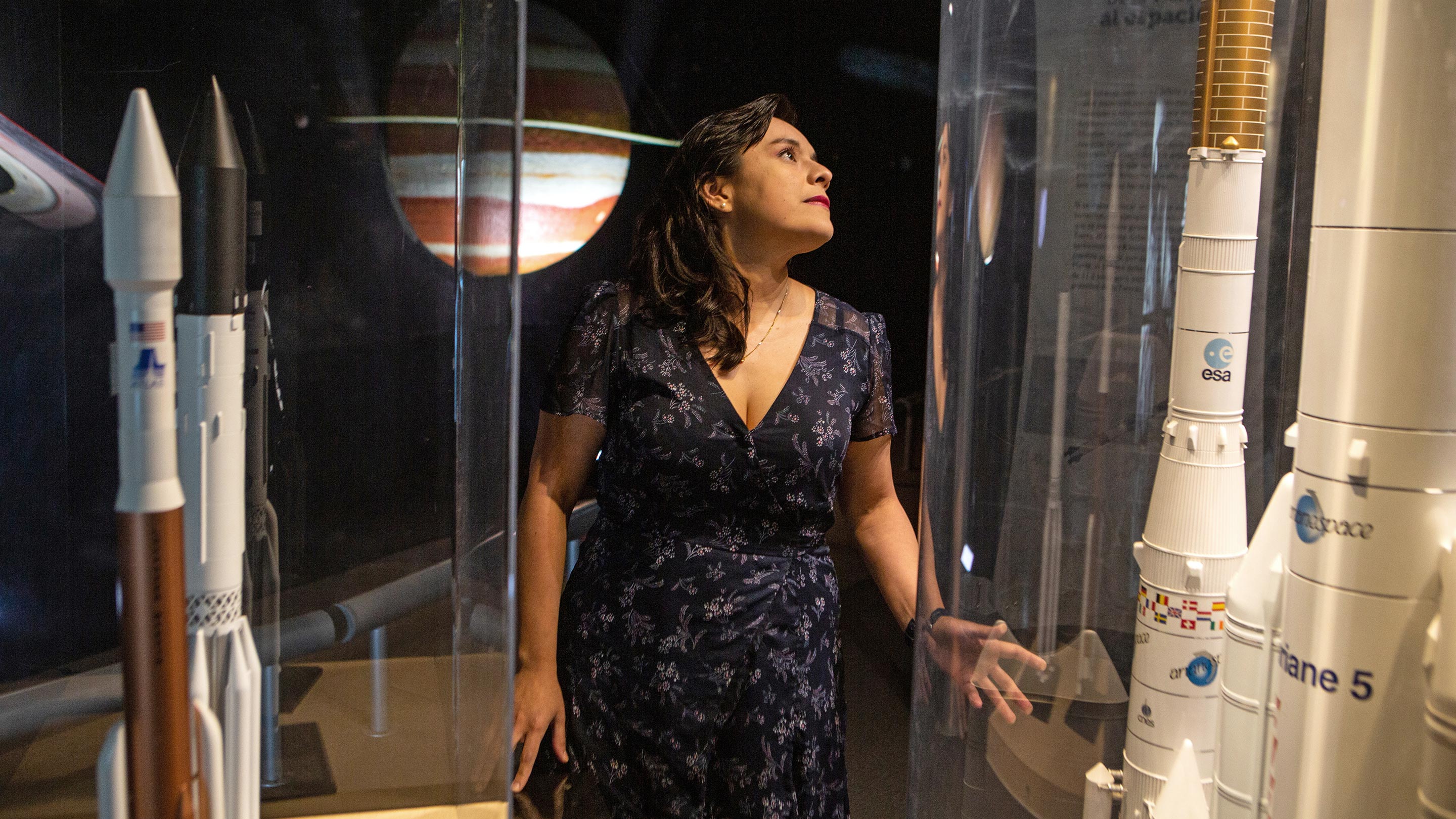 Escamilla-Rivera stands among models of rockets at Universum.

Another new way to test these alternative theories is to do simulations on a supercomputer. You can control your own universe and make projections about which theory is going to work.

What brought you back to Mexico after studying in Europe?

I was finishing my postdoc in Nottingham, England, and I received a call saying: “We are opening an institute in Mexico that will be funded by the Abdus Salam International Center for Theoretical Physics, and we need Mexicans that are studying in Europe to come back to Mexico.” It was an obvious choice to come back to my country and pursue the same scientific questions.

At the time, there was no one in Mexico that could do precision cosmology using statistics. So when I arrived it was fresh air for several of my colleagues. I was teaching them all that I’d learnt in these other countries.

Then four years ago I received a call from UNAM. It was very exciting because I knew that I could form a new research group in my country.

What challenges have you faced in building this research group?

Part of the university community thought that cosmologists only need paper and a pencil. It’s more than that. You need supercomputers, you need the chance to travel to meetings, to build relationships and collaborate. All of this requires a lot of financial support.

Last year, I convinced my university that this is the future, that we need to do precision cosmology. And afterward I also received support from the Royal Astronomical Society. Our precision cosmology group is now very strong; we’re 20 people. We can ask Mexican researchers to come back to their home country and offer a permanent job. We also have colleagues and students from all over the world. It’s exciting times.

When do you expect observations will start to disagree with general relativity?

We are close to that. I am sure that the recently launched James Webb Space Telescope is going to open a new door with observations closer to the origin of the universe. We’ll see an era when hydrogen and helium are fusing to form the first galaxies in the universe. I suspect general relativity is not going to work at that time because the energy is so high. So that era can give you a very truthful test about which kind of theory of gravity is correct. 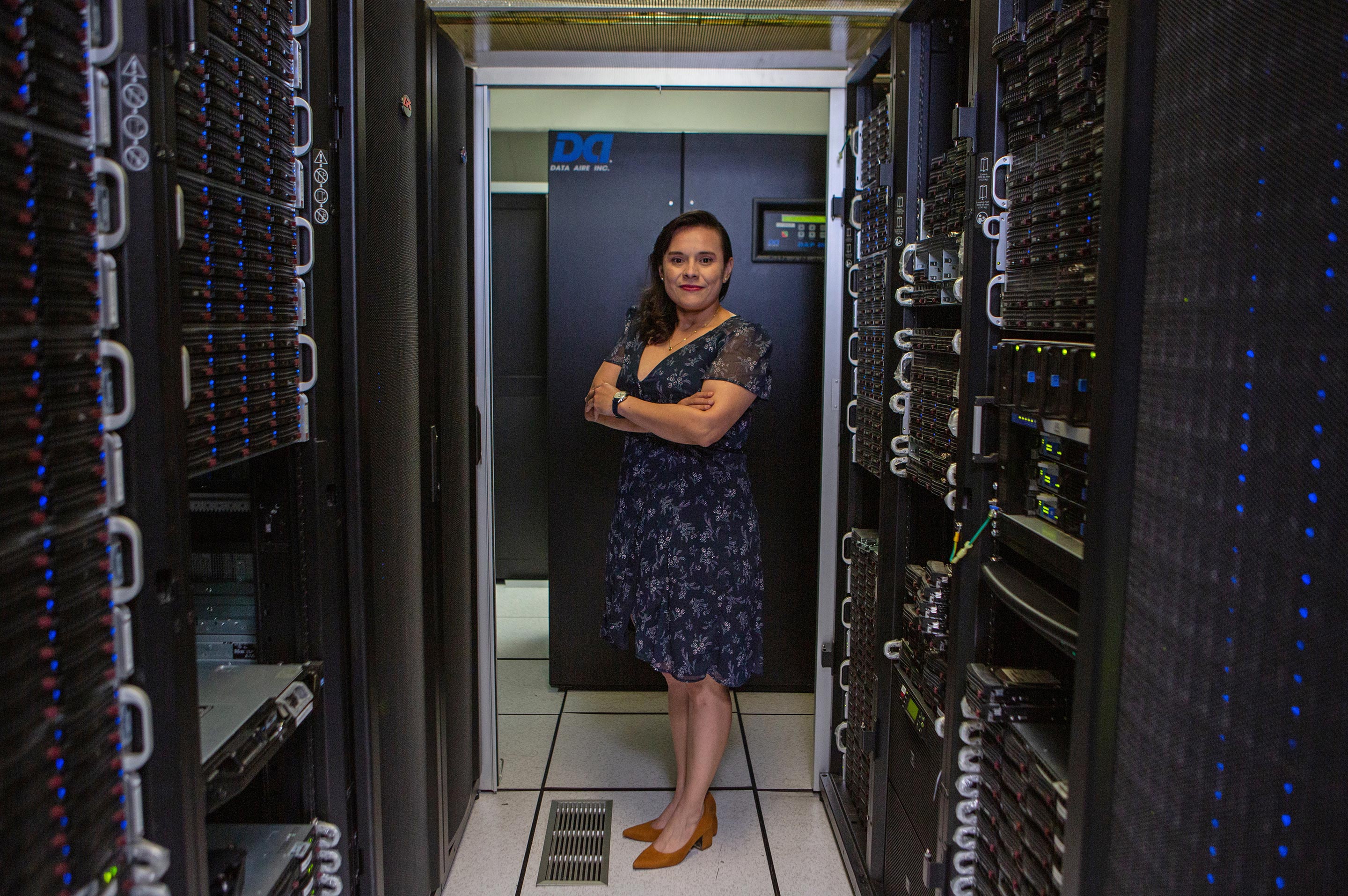 “A calculus that took years can take this computer 30 seconds,” Escamilla-Rivera said of UNAM’s computer cluster, as she stepped into the whirring, blinking space.

Which alternative theory would you put your money on?

I would put my money on teleparallel gravity.

How does that differ from general relativity?

In general relativity, an important concept is the space-time curvature, which tells you about the distribution of matter. You can see the sun as a big mass that’s put on a sheet, then the sheet starts to curve. Einstein made this relationship between matter and geometry the basis of the universe. Now in teleparallel gravity, the sun is forming something like a tornado. So instead of curvature, the sheet is twisted. This is called torsion.

Teleparallel gravity was actually one of Einstein’s final calculations in the last part of his life. Some people were writing a new mathematics using torsion. When Einstein saw this, he saw a way to connect his theory, general relativity, with another very important force, electromagnetism. He said, OK, maybe we can unify all of the forces. Unfortunately, he wasn’t successful, and his idea started to be forgotten.

But some theorists continued to work on it. Just a couple of years ago, Jackson Levi Said at the University of Malta found that it was possible to transform the language of teleparallel gravity into a cosmology — a set of equations that relate all the parameters that we observe in nature, like the density of matter. We could connect this cosmological model with experiments. I said, “OK, I’ll check it with the current data, for example, the cosmic microwave background radiation,” which is light from the early universe. And we found that the equations could match this data without needing to invoke dark matter or dark energy.

What evidence is there for teleparallel gravity?

It’s very elegant mathematically. But we don’t yet have experiments that prove it, because at a local level, teleparallel gravity is very, very similar to general relativity. The differences are in the very early universe and very far in the universe’s future.

Observations of the early universe with the James Webb will be the first tests of teleparallel gravity. If we can explain the formation of the first galaxies better than general relativity, that will be a beautiful test. Maybe teleparallel gravity can also explain what we see in photos of a black hole horizon.

You mean the Event Horizon Telescope’s recent photographs of the supermassive black hole in the M87 galaxy. What’s puzzling about the photos?

One of the groups inside the Event Horizon Telescope Collaboration is looking for solutions in general relativity. But another group, which I am part of, is taking another route with modifications and extensions of gravity.

The problem is, to distinguish these possibilities we need more data. The idea now is to take a movie of the black hole to see its evolution. Maybe it will give us better restrictions on the theories we want to test.

When you were a kid, did you ever imagine that you would end up challenging Einstein?

Challenging Einstein? Probably! I think this is the dream of any kid that wants to understand the cosmos.