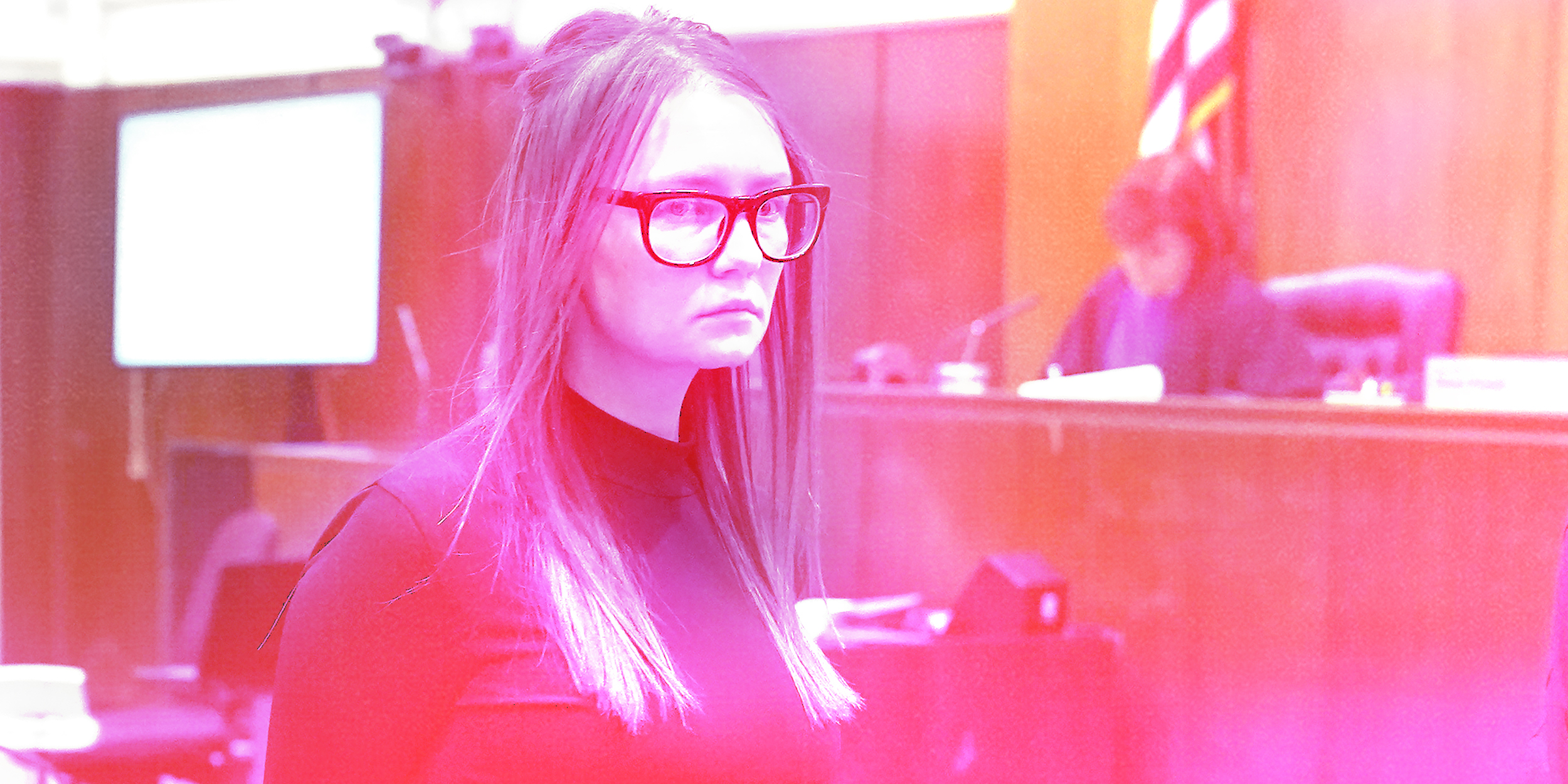 “The only thing worth a dime in here is her,” says Anna Delvey (played by Julia Garner), champagne glass in hand, pointing blithely to one of real-life artist Cindy Sherman’s untitled film stills. “Before this series, Sherman was just another photographer hiding behind the lens. Then, one day, she steps into her own frame, considers herself to be worthy. Rather than being forced into a role in the male-dominated art world, she takes a leading role in her work. And it changes the world.”

This scene is incidental to the plot, but it’s indicative of the central thesis of “Inventing Anna,” Netflix’s Shonda Rhimes-led drama about Delvey (legal last name, Sorokin). Also known as the “Soho Grifter,” Delvey became a New York scammer sensation a few years ago. From the jump, “Inventing Anna,” which premiered Friday, is equal parts confounded by and enamored with the real-life con woman at its center. Thus, the show largely buys her bull.

From the jump, “Inventing Anna,” which premiered Friday, is equal parts confounded by and enamored with the real-life con woman at its center.

Delvey, who posed as a German heiress, traipsed around New York City tipping $100 bills, living in luxury hotels and trying to launch a proposed $40 million art foundation, leaving a trail of conned financial institutions and acquaintances in her wake. She was convicted in 2019 on eight charges, including second-degree grand larceny, attempted grand larceny and theft of services. (She was found not guilty on attempted grand larceny in the first-degree, however, and also acquitted of stealing $60,000 from a Vanity Fair editor and friend.)

Delvey is all of us, the Netflix series coos as we binge nine long (too long! Way too long!) episodes — or at least a part of all of us. The part that wants and wants and wants. And wouldn’t it be delicious to see a young woman get what she wants? Or at least metaphorically die trying?

Americans love Delvey because we love a scam story. We are a culture obsessed with the promise of individualist reinvention. We are a people raised on scams spun as patriotism — the pull-yourself-up-by-your-bootstraps ethos of the American dream being the biggest scam of all. It’s the reason we devoured journalist Jessica Pressler’s original New York magazine feature about Delvey — one of the most-read stories worldwide in 2018 — as well as content about Billy McFarland and Martin Shkreli and Elizabeth Holmes. (Holmes’ fictionalized limited series is set to drop in March on Hulu). It’s the reason that podcasts like Scam Goddess and Fraud Talk and ScamWow exist, delivering a weekly dose of the stories so many of us — myself included — crave.

Lately, though, American scam stories have gotten a lot darker.

“The global financial crisis resulted from rampant misrepresentation in the residential mortgage market,” Edward J. Balleisen, author of “Fraud: An American History From Barnum to Madoff,” told me. “During [Donald] Trump’s presidency, his falsehoods came so thick and fast that news organizations tabulated them on a weekly basis. More recently, the Covid pandemic has unleashed an avalanche of spurious cures and fake masks.”

In contrast stands Delvey — so glittery, so brazen. We allow ourselves to wonder: Did her victims sort of deserve it?

“Inventing Anna” — which is not only based on Pressler’s reporting, but also involved securing Delvey’s life rights — leans hard on the mythology that her crimes were at worst largely victimless and at best nearly progressive. Her victims, including (especially!) entry level Vanity Fair photo editor Rachel DeLoache Williams — played with utter contempt by Katie Lowes — are portrayed as craven opportunists or creeps or narcs or idiots or all of the above. (In some cases, these labels feel earned. In others … not so much.)

And while Delvey’s whiteness — a quality that seems essential to how far her cons were able to go — is barely interrogated, her gender is ever-present. This is not surprising, Balleisen told me, as the coverage of female scammers tends to “evoke enduring themes of plucky self-invention, as well as the difficulty of distinguishing admirable self-promotion from contemptible misrepresentation and deceit.”

“Every day men do far worse things than anything I’ve allegedly done. And what happens to them? Nothing,” Delvey says from Rikers Island in the series. “Men fail upwards all the time.”

Men — especially rich white men — are privileged in ways that give a wider latitude for scammy behaviors, legal or not.

Delvey’s pseudo-feminist monologue isn’t exactly wrong. Men — especially rich white men — are privileged in ways that give a wider latitude for scammy behaviors, legal or not. A character in “Inventing Anna” who effectively illustrates this point is Alan Reed, the lawyer who vouches for Delvey as she seeks a multimillion-dollar loan, blinded by the dollar signs he sees in his own future if she secures it. At work, after Delvey is exposed and arrested, he gets promoted.

As Jia Tolentino wrote in her 2019 book of essays, “Trick Mirror,” it has largely “been accepted as gospel” that, for women, “personal advancement is a subversive form of political progress.” This is how we got the era of the Girl Boss, a term brought to the masses in large part by Sophia Amoruso, founder of Nasty Gal and author of 2014’s “#GIRLBOSS.”

“The trickiest thing about this idea is that it is incomplete and insufficient without being entirely wrong,” Tolentino wrote. “The problem is that a feminism that prioritizes the individual will always, at its core, be at odds with a feminism that prioritizes the collective. The problem is that it is so easy today for a woman to seize upon an ideology she believes in and then exploit it, or deploy it in a way that actually runs counter to that ideology. That is in fact exactly what today’s ecosystem of success encourages a woman to do.”

During the pandemic, the myth of the Girl Boss as feminist icon was officially punctured. Prominent female founders like Steph Korey (Away), Audrey Gelman (The Wing), Yael Aflalo (Reformation), Jen Gotch (Ban.do), Christene Barberich (Refinery29) and Leandra Medine Cohen (Man Repeller) stepped down after criticism that ranged from allegations of general mistreatment of employees to outright racism. The lesson was clear: Just because a woman is out here, getting hers, doesn’t mean her leadership or choices will be inherently better for those around her or the world at large. Women have, perhaps, fewer opportunities to exploit, but once given them, market conditions will incentivize them to do just that.

This shift in public discourse between Pressler’s 2018 New York magazine feature on Delvey and the “Inventing Anna” premiere makes the latter’s Anna-is-all-of-us thesis feel even murkier and more out of touch.

The New York magazine source material threaded this needle more carefully, positioning Delvey within the context that bred, encouraged and allowed her cons to thrive, without propping her up as some sort of feminist Robin Hood. (After all, while many of Anna’s cons did indeed come at the expense of the rich, she certainly was not practicing any form of wealth redistribution.) But “Inventing Anna” fails to add anything particularly useful or interesting to the story that Pressler already told.

Art based on real life is best when it illuminates new truths. But “Inventing Anna,” while stopping short of co-signing Delvey’s crimes, does little to help us understand who Anna Sorokin really is or why her story is so worth dedicating prolonged attention to.

“[It’s] something about class, social mobility, identity under capitalism, I dunno,” Pressler’s fictionalized counterpoint says, trying to articulate what her piece will accomplish to a colleague. After watching all nine-plus hours of “Inventing Anna,” I dunno either.