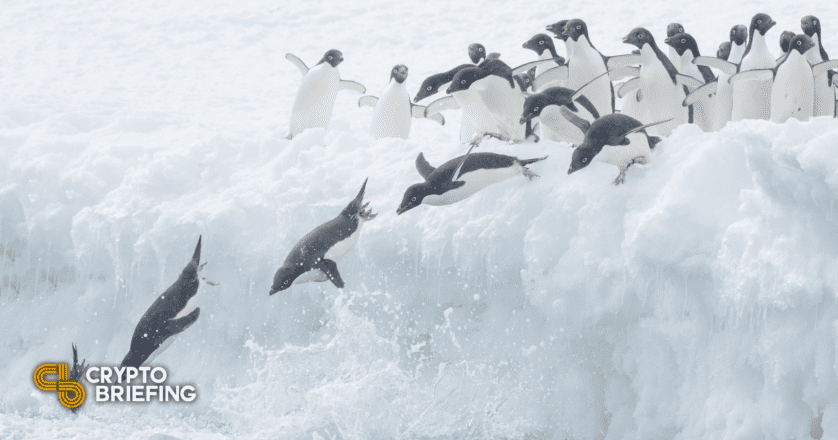 Penguins Are Huddling on Ethereum Amid Cries of Scam

Pudgy Penguins community members are proposing a fork of the NFT project amid accusations that its founders have siphoned funds from its treasury.

One of the most popular JPEG collections of crypto’s first NFT summer is in turmoil.

Drama is unfolding in the Pudgy Penguins community after one of its most loyal supporters, who goes by the name 9x9x9, posted a tweet storm making a number of allegations against one of the project’s controversial co-founders, Cole Villemain. In the thread posted on Jan. 6, they alleged that Villemain and his other co-founders had emptied the funds stored in the collection’s treasury.

I m gonna talk about the recent rumours about me taking over pudgy penguins, I did not want to talk about it first, but with so many DMs, I felt responsible for keeping everything as transparent as possible. So people will not make any investment decisions based on rumours.

Pudgy Penguins launched in July amid a period of mania in the NFT space. The collection consists of 8,888 avatars of cartoon penguins living on the Ethereum blockchain. Similar to other avatar collections that launched in 2021, each penguin is unique with different traits denoting its level of scarcity. The NFTs were available to mint for 0.03 ETH and quickly sold out. In the days following the launch, the collection soared in popularity as key players in the NFT space endorsed the project on social media. By August, The New York Times had run a feature on the collection titled “I Joined a Penguin NFT Club Because Apparently That’s What We Do Now.”

On the Pudgy Penguins website, Villemain is listed as a co-founder alongside three other team members: mrtubby (real name Clayton Patterson), mickyj, and jonah. While the group made roughly 266.64 ETH from the initial sales, they also earned a portion of every secondary sale (as NFTs are smart contracts, they are typically programmed to pay a portion of the secondary sale to the creator). The collection has totalled $145 million in trading volume on OpenSea since it launched.

In their tweet storm, 9x9x9 was particularly critical of Villemain, the project’s best-known figure. Villemain posts as COLΞ and uses the URL @ColeThereum on Twitter, where he has over 115,000 followers. In addition to the suggestion that Villemain and his co-founders had emptied the project’s treasury, they alleged that Villemain had offered to sell a 20% stake in the project for 4,000 ETH, around $12.9 million at press time. In the tweet storm, 9x9x9 alleged that the team had reduced their sale offer to 888 ETH after they rejected the offer, before noting that the community had proposed removing Villemain from the team. “Cole is the reflection of the lack of trust and transparency between the founders and community of the project. Removing Cole is like eating a painkiller when you have cancer,” they wrote.

9x9x9 is a known Pudgy Penguins advocate; they say they’ve invested around $6 million in 244 NFTs from the collection and minted 540 NFTs from the Lil Pudgy collection, a spin-off to Pudgy Penguins. The tweet storm also featured a screenshot of what appears to show Villemain confirming that the project’s treasury would be empty at the point of the sale.

Villemain has been accused of sketchy behavior within and outside the NFT community in the past. Interestingly, three days prior to 9x9x9’s tweet storm, he took to Twitter to post an announcement that he was taking a break from the social media app and would be “focused on mental health, building, and doing what I love behind the scenes.” Many NFT community members responded by labelling him a scammer.

I am going to take a break from Twitter this January. Will be focused on mental health, building, and doing what I love behind the scenes. 2021 was… crazy to say the least.

Thank you so much to everyone who supported me this year, you know who you are. ❤️

Prior to Pudgy Penguins, Villemain memorably launched the dubious NFT collection My Fucking Pickle. On OpenSea, the collection features a description that reads “We don’t promise you anything except selling you a fucking pickle…” The 10,000 NFTs quickly sold out despite its lack of innovation or creativity, leading some to describe the project as a cash grab.

Villemain has drawn criticism on several other occasions. In August, a popular on-chain analyst operating under the handle @zachxbt posted a viral Twitter thread accusing him of various unscrupulous actions. The thread detailed how Villemain had launched a dropshipping business called Eboy Outlet, whose Facebook and Instagram pages were littered with negative reviews and complaints from dissatisfied customers who claimed that they had not received their orders or refunds at the time. Both pages were deleted shortly after @zachxbt highlighted them in their post.

Villemain later promised to give away an NFT from the Fame Lady Squad collection to one of his followers, before listing it for sale on OpenSea. He insisted that it was his plan to give the piece away after a community member questioned the listing. Villemain has also previously admitted to promoting projects without disclosing that he was paid to endorse them.

Villemain has been active in the NFT space since the technology went mainstream last year, and is seen as something of an influencer in the space despite the various controversies that surround him. He’s also amassed a large collection of digital assets in his short time in the space. Crypto Briefing traced an Ethereum wallet he uses under the Ethereum Name Service domain name colethereum.eth. Etherscan data shows that the wallet holds roughly $742,500 in ETH and other fungible tokens, as well as hundreds of NFTs. In November, he posted a tweet expressing enthusiasm for the play-to-earn game Wolf Game, claiming that he had minted a collection of NFTs worth over $500,000 at the time.

Prior to 9x9x9’s tweet storm, Pudgy Penguins had been the subject of intense criticism across the NFT community. The project previously airdropped NFTs called Pudgy Presents to Pudgy Penguin holders in Aug. 30, which were set to be revealed on Christmas. The airdrop sparked widespread disappointment when they turned out to be animated fishing rods rather than penguin style characters. The project also organized a sale of baby penguin NFTs called Lil Pudgys following the success of Pudgy Penguins. Most Lil Pudgys were sold via a Dutch auction format, further enriching Villemain and his other co-founders.

In the community vote on Villemain’s leadership, which took place in a private Discord channel, Pudgy Penguins holders overwhelmingly voted in favor of removing Cole from the leadership position.

Since then, many discussions about restructuring the project have surfaced. Some community members have discussed the possibility of forking and turning the project into a decentralized autonomous organization, similar to how many popular DeFi projects function. Another idea proposed that holders could lock up their penguin NFTs in a smart contract and mints new ones in a 1:1 ratio.

Amid the drama, the official Pudgy Penguins Twitter account announced that it was “finalizing important details” with the team and would come up with a “groundbreaking update,” to which many community members responded with negative comments. “L,” wrote the NFT collector Loopify, likely referring to a “loss.” “cool, the 4 most irrelevant people in the project had a convo. good to hear,” added another NFT collector known as Jebus.

It is noteworthy that the Pudgy Penguins co-founders control ownership rights to the project. Several private investors have expressed interest in acquiring brand equity. The Mark Cuban-backed NFT marketplace Mintable made a public offer to buy out the Pudgy Penguins founding team for 750 ETH. The team proposed acquiring full control of the smart contract backing the Pudgy Penguins collection, as well as the intellectual property rights to the penguins and other associated NFTs. Another NFT collector known as Beanie made an offer, but later retracted it after announcing that several associates had advised him “not to give money to Cole.”

Neither the Pudgy Penguins team nor 9x9x9 had not responded to Crypto Briefing’s request for comment at press time.

Disclosure: At the time of writing, the authors of this feature owned ETH and several other cryptocurrencies.

Are pudgy penguins just another elaborate money grab hustle freeriding the NFT hype train or a legitimate project seeing well-deserved success? While some high-profile influencers in the space warn that…

A Guide to Yield Farming, Staking, and Liquidity Mining

Yield farming is arguably the most popular way to earn a return on crypto assets. Essentially, you can earn passive income by depositing crypto into a liquidity pool. You can think of these liquidity…

An early NFT project called EtherRocks has soared in value this weekend, with the floor price more than doubling in 48 hours.  EtherRocks Sell For $100,000 EtherRocks is the latest…

Early Ethereum projects are exploding amid wild speculation in the NFT market.  NFT Fans Scoop Up Archive NFTs  NFT collectors are turning their attention to some of the oldest projects…