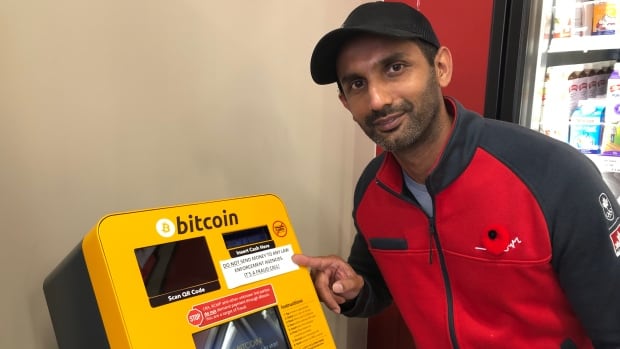 The owner of a Petro-Canada station in Belle River, Ont., near Windsor, is taking measures to prevent more people from becoming victims of a scam after noticing several seniors in his store using a bitcoin machine.

Amarjit Singh says several seniors have come into his store in Belle River, Ont., recently to try to pay fraudsters with bitcoin. 1: 35

The owner of a Petro-Canada station in Belle River, Ont., near Windsor, is taking measures to prevent more people from becoming victims of a scam after noticing several seniors in his store using a bitcoin machine.

Amarjit Singh says since the machine was placed in his store three months ago, he’s noticed 12 seniors coming in to buy bitcoin because they thought they had to pay a fine to the RCMP or Canada Border Services Agency.

“The first case was an individual, a senior citizen came in and he was on the phone using this machine and he was talking very loud over his phone, and I asked and I at first thought maybe he was having an argument with somebody,” Singh said.

“He told me he was accused … in a scam, in a global smuggling ring, and he has RCMP on the phone with him all day long … . And he’s trying to sort his case out and they ask about $6,000 from him through bitcoin.”

Singh said he was able to prevent the man from transferring the money but found out that unfortunately, he had already sent $975.

Then, Singh said, another man came in with a similar story.

“He was told to put the money there and he’ll get money back into his regular bank account because his bank account was compromised. That’s what he told me.”

According to the Canadian Anti-Fraud Centre, this is a new variation on a scam. Victims are being contacted by the scammers, who are posing as Canada Border Services Agency workers, and are told that the agency has intercepted a package addressed to the victim that contains illegal substances. They may ask for personal information or demand money to be transferred.

OPP Const. Steven Duguay says police will never ask for fines to be paid with bitcoin. 0: 16

On a cellphone, the call can look legitimate, Singh said. “When you look at the caller ID, it actually says RCMP.”

In both cases in Belle River, police were notified. The Ontario Provincial Police said they are investigating.

Police say being the victim of a scam with bitcoin is especially bad because it’s impossible to trace.

“Once you send a transfer through a bank, you can reverse those charges if they haven’t been processed yet or you know the end user,” OPP Const. Steven Duguay said.

“A lot of times with these cryptocurrencies, we don’t know the end user, and once that transaction is sent, it’s irreversible.”

The bitcoin machine at Singh’s Petro-Canada has a warning label on it, and he has also added one of his own to prevent more people from becoming victims.

He also told staff to keep an eye out for more potential victims.