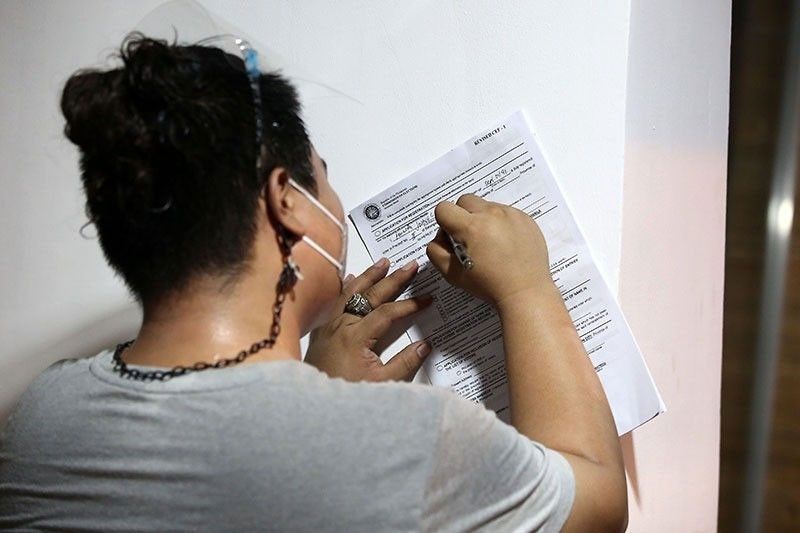 People camp out along the walkway surrounding the Ali Mall in Quezon City as they wait for the opening of Comelec’s satellite voter registration booth on Monday midnight, Sept. 27, 2021.

MANILA, Philippines — With the 2022 elections drawing near, the Commission on Elections (Comelec) yesterday reminded politicians not to fall for con artists whose modus operandi is to entice them with promises of sure victory.

Comelec spokesperson James Jimenez warned politicians not to believe those who claim they can manipulate the election system for a fee.

“Over the weekend, we have gotten a lot of reports of people trying to run a con, telling politicians that if they pay, they can win. We would like to remind everyone, the politicians especially, not to be misled into believing this is possible. This is not possible,” he said.

The scammers reportedly often introduce themselves as either someone with ties with the Comelec or with the service provider.

The scammers would also often prey on candidates of single position races. “They would offer the same deal that whoever win, wins; whoever loses gets a refund. You would think that something (fiddling with the results) happened but nothing happened,” Jimenez noted.

“This is false. This is the same kind of scam that is run on unsuspecting politicians since 2010,” he added. Jimenez said that in the past, they have conducted sting operations against these scammers, in coordination with agents from the National Bureau of Investigation (NBI).

Comelec Commissioner Rowena Guanzon advised lawyers of litigants to refrain from publicly expressing their opinions on cases that are still pending before the commission and indirectly pressuring them.

“Will lawyers for litigants @ COMELEC please shut up. When their cases are in court, all lawyers know they are not supposed to talk about it to the media. What do they think the COMELEC is?” Guanzon tweeted yesterday morning.

The Comelec spokesman likewise supported the call of Commissioner Guanzon, appealing to petitioners and respondents to “please respect the Rule of Pendente Lite (during litigation) to refrain from speaking about the case and just let their pleadings do the talking for them. It is easier for everyone involved if there is some sobriety in this process.”

While there is no deadline for a political aspirant to withdraw from the 2022 elections, Jimenez asked candidates intending to back out not to prolong their withdrawal because “there is no good to be done to the system or to the Filipino people, by dragging things like that.”

“This is not conducive to an orderly elections. So we would hope candidates will understand that,” Jimenez said, adding that it would be better if they formally withdraw their candidacy since the Comelec is already making preparations for the May 9 national and local elections.

Jimenez did not mention any specific candidate, but since Nov. 29, supporters of Sen. B0ng Go have been holding rallies outside the Comelec office to appeal to him to reconsider his decision and run for president.

“Overcrowding might be a source of infections so we reiterate and emphasize our message against overcrowding which is happening already,” she said.