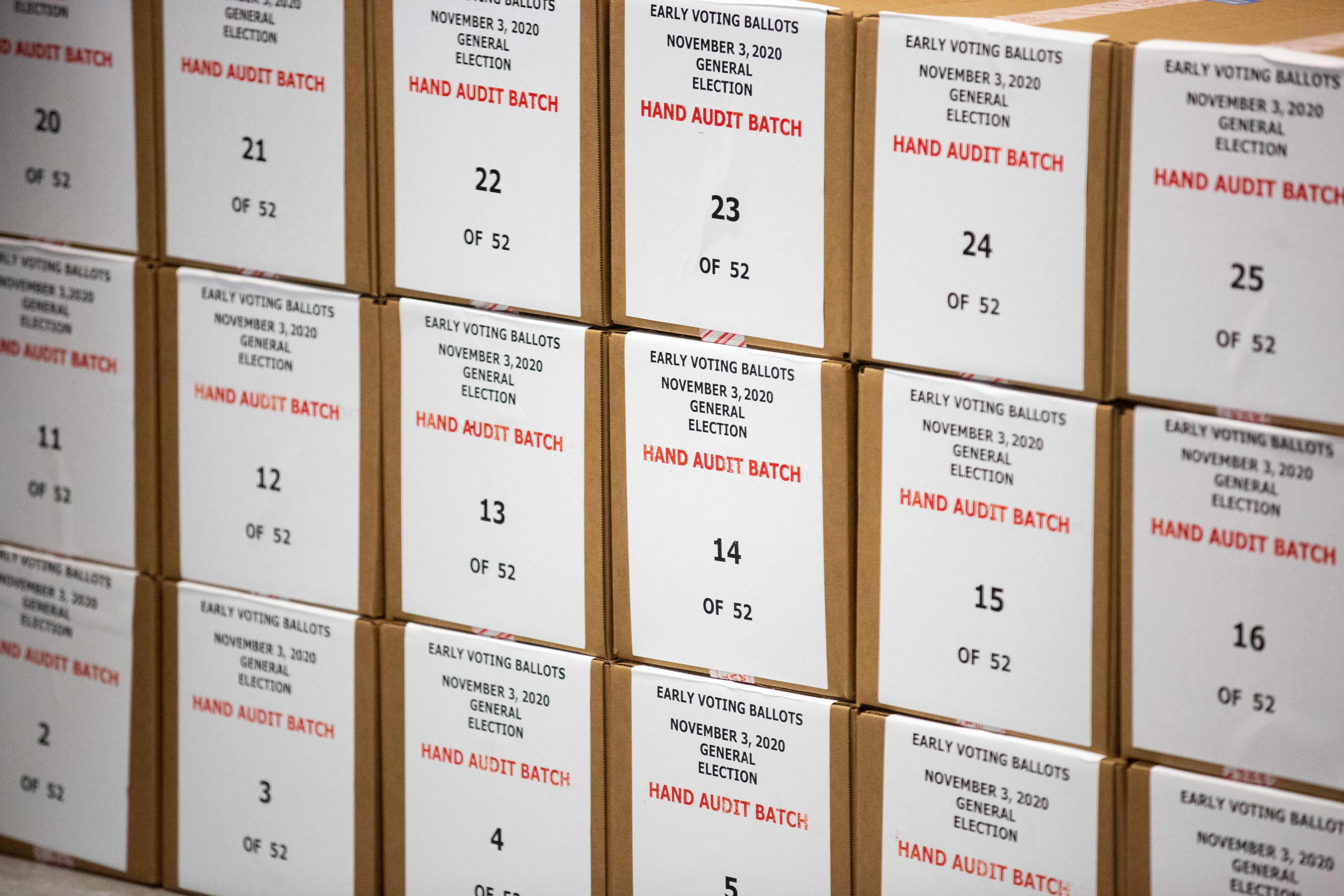 The Media Is Getting the Arizona “Audit” Story Wrong

In a crowded field, the months-long “audit” of the presidential votes in Arizona’s largest county may be the dumbest political story of 2021. The extent to which the word audit applies to the zany shenanigans that Arizona has endured this year is a matter of debate. A better term might be a transparent sham, undertaken by bad-faith actors promulgating easily disprovable lies about the legitimacy of the presidential election. The firm conducting the audit was literally named “Cyber Ninjas”—a detail so absurd it essentially serves as a punchline that doesn’t need a setup. The audit itself was silly, transparently partisan, and sinister, insofar as it didn’t really matter that it was obviously bogus: The whole point was to keep alive the myth that the 2020 election had been stolen from Donald Trump.

In the end, the Cyber Ninjas couldn’t pull it off. Their long-awaited report, released late last week, acknowledged that Joe Biden did, in fact, win Maricopa County. Not only that, he won it by a slightly larger margin than previously thought. If the audit was meant to prove the inherent illegitimacy of the 2020 election, it backfired. And for many in the press, it was a moment to spike the football. CNN’s John King wryly observed that it was a “death blow” to Trump’s “fraud fantasy.” Many outlets reported that it “confirmed” Joe Biden’s victory, as if such a thing were in doubt to begin with. Even The Wall Street Journal’s editorial board stepped in to suggest that enough is enough, asking, “When are Republicans going to quit playing this game?”

These reactions—whether jaded, gleeful, or exhausted—imply that there is some endpoint for Republican claims of fraud: that one day, the GOP will wake up and realize that Joe Biden really did win the election. There is no reason to believe that is the case. Indeed, reaction from the right has been nonplussed: Donald Trump is still claiming victory, while outlets on the right have focused on other sensational and unsupported claims, particularly that tens of thousands of “illegal” ballots were cast, even though election experts have widely disputed these conclusions. Coverage of the audit itself suggests that many news outlets still haven’t realized how to cover Republican efforts to undermine elections.

The biggest problem with coverage of the “audit” was treating it as an audit at all—the mere use of that word itself conveys a sheen of respectability these efforts haven’t earned. There is nothing to authenticate or confirm: Joe Biden is, and has been, the legitimate winner of the 2020 election, both in Arizona and in America. By claiming, even ironically, that the probe had “confirmed” Biden’s victory, media outlets were inadvertently giving it legitimacy. As Jon Allsop wrote in the Columbia Journalism Review:

If Cyber Ninjas had claimed that Trump actually won Maricopa County, credible news organizations would never have dreamed of reporting that the process “overturned” or “disproved” or “cast doubt on” Biden’s win; by using words like “confirmed” to describe the contrary outcome, they pegged the legitimacy of the process to its result, rather than writing it off as fundamentally illegitimate in and of itself—a framing error that could tie the press in a bind should a similar future scam conclude by asserting a grand conspiracy.

In many ways, the conclusion that Biden actually won Maricopa County—and that he did so by a few hundred more votes than in official counts—is a distraction from what the GOP and the Cyber Ninjas are really up to. The Arizona audit itself may have been a circus sideshow for most in the press, but it has been a major fixation of both former President Trump and his allies in right-wing media. The point wasn’t to get Arizona’s electoral votes thrown out. Rather, it was a means of continuously casting doubt on the legitimacy of the election in order to provide cover for sweeping restrictions on voting, both in Arizona and elsewhere.

The Cyber Ninjas audit itself may not have found evidence of “massive fraud,” but it did purport to find a lot of other irregularities—ballots may have been cast by people who moved before the election, and a smaller proportion of ballots ended up getting rejected than in years prior, despite a massive rise in vote by mail. These “irregularities” aren’t the election-overturning bombshell that was promised, but they are being held up by Trump and others—and are being used to perpetuate the idea that the election was somehow stolen from him. Arizona Republicans are already using the report to call for more voting restrictions.

One problem with the way this has been covered is that the media has approached this story with an underlying assumption that, at some point, the jig will be up: The faux-auditors will be exposed as fakes, they’ll surrender their position, and logic will prevail. Joe Biden has been president for eight months; no actual evidence of fraud has emerged anywhere. The best efforts that Republicans have made to overturn the election have been pathetic shams: Even the Cyber Ninjas couldn’t get the job done. Without a doubt, the story is highly comedic—as with Trump’s attempts to “legally” overturn the election, the result is akin to Wile E. Coyote chasing the Roadrunner: By now, we’ve seen failure in a seemingly infinite number of varieties. As with all things Trump, the situation is at once buffoonish and terrifying. The danger is in assuming that we will, at some point, come to an end.

The coverage of the phony Arizona audit needs to be right-sized and presented as it truly is: one part of a larger effort to undermine confidence in elections and to pass laws that make it easier for Republicans to suppress the vote and win. These Arizona antics are fantastical, but they are no more ridiculous than any of the claims of fraud that have successfully led to restrictive voting laws being passed in states across the country. The GOP playbook now is to use whatever means necessary to undermine faith in elections that Republicans do not win and to use a veneer of legitimacy—lawsuits, audits, hearings—to launder their phantasmic claims. We might laugh at the Arizona audit, but it certainly won’t be the last one.