No matter what you believe about USDT—Tether—it is beyond question that the stablecoin has become integral to the digital asset industry. It’s the most-traded digital asset by a significant margin, and the network of exchanges surrounding Tether hold significant amounts of USDT. In fact, the single largest holder of USDT is Binance (over 17 billion USDT), followed by Huobi.

So, if it is true that USDT aren’t close to being backed by reserves (we and many others are saying they aren’t), the billions held by exchanges throughout the ecosystem are not worth an equivalent in USD, they’re worth nothing at all—which means the digital asset markets have an enormous impending liquidity problem.

Unfortunately, as time goes on, we see two things from Tether: more evidence that USDT is unbacked, and an increasing reliance on Tether throughout the industry and beyond it. The month of June has been no exception.

The Tether scheme to this point has been covered extensively on CoinGeek. It has also been the subject of rigorous investigation by a number of interested parties, such as by bloggers Bitfinex’ed (whose recent recap of the Tether story can be found here) and CryptoWhale (who called Tether the biggest threat to the crypto ecosystem) as well as independent journalists Amy Castor and David Gerard.

However, when you’re trying to hold up a paper-thin charade as Tether is doing, the story never ends; there will always be more lies and more misdirection required to keep it going. While this may successfully draw in more suckers before an inevitable and violent collapse, it also presents new opportunities to catch Tether in its web of lies.

Both things happened this month.

Tether continually offers proof against its own backing

When the so-called Tether treasury makes a print of USDT, they are issued on multiple blockchains. The vast majority go to either TRON or Ethereum, with TRON picking up speed over the past 12 months as Ethereum struggles with congestion and high-cost transaction fees. Of Tether’s $62.6 billion market cap, almost $32 billion exist on TRON, while just under $31 billion exist on Ethereum.

That means that if Tether is telling the truth about each Tether being backed to the value of $1USD, the company should be sitting on more than $62.6 billion in assets. If you were asking Tether before it was forced by the NYAG to change its story, it would mean Tether has $62.6 billion in cash. Tether no longer tries to argue this for obvious reasons, but the company has never acknowledged that its story is constantly changing.

It also means that we are supposed to assume that whenever Tether prints more USDT, its assets have grown by that exact amount. While Tether’s ridiculously opaque reserves breakdown provides some cover for this, it can’t hide some of the more obvious absurdities brought by this assumption.

For example, Reddit user u/StablecoinsFraud recently tracked an announcement by Tether that it would be performing a chain swap on 3 billion USDT at the request of Binance, meaning that 3 billion USDT would be moved from the TRON blockchain to the Ethereum blockchain in three lots of 1 billion. Tether confirmed that the swap wouldn’t affect the supply of USDT, and why would it? After all, Tether is always telling us that you can’t have USDT without the USD, right?

Tether CTO Paolo Ardoino confirmed the process would work by first authorizing the transferred amounts on Ethereum, and then revoking the corresponding amounts on TRON. According to Ardoino, while Tether had already authorized the full 3 billion on Ethereum, only the first 2 billion-tether lots were swapped (and cancelled on TRON) on 31 May: Binance apparently requested that the final billion only be swapped the next day, meaning that as of the end of May 31, a full additional billion USDT were in circulation, purely as a result of the chain swap arrangement with Binance. This obviously makes a mockery of Tether’s claim that USDT is backed by a stable reserve of assets, but at least the discrepancy would be short lived—at least according to Ardoino.

However, as is common with Tether, its representations to the public differed from reality. You can see from Tronscan that, as described by Ardoino, on May 31 the 3 billion USDT were authorized to Ethereum, and 2 billion were revoked on TRON. However, as of June 16, that the outstanding billion dollar has never taken place.

USDT circulation after the chainswap

Whether or not Tether eventually completes the swap is irrelevant—it’s been over two weeks since Binance’s request, and the net result has been an additional billion in USDT in circulation. Whether the chainswap request was a coordinated smokescreen to hide the fact that Tether was printing yet more USDT out of thin air or just a temporary quirk doesn’t change the point: there is little-to-no connection between the USDT in circulation and the number of assets—cash or otherwise—held by Tether.

In response to the growing chorus of voices critical of USDT, the Tether playbook has been to simply pretend the critics and regulatory investigations against it don’t exist. Tether does this because it knows there are scores of people who have benefitted from worthless USDT being pumped into exchanges and buoying digital asset prices more or less across the board, and who will be only too willing to take to social media to defend the company when, for example, the NYAG announces that USDTs are not fully backed and bans the company from operating in New York.

Two of the more prominent of these beneficiary-defenders are Blockstream executives Adam Back and Samson Mow. Digital asset analyst CryptoWhale collated what these two have had to say on Twitter concerning Tether: 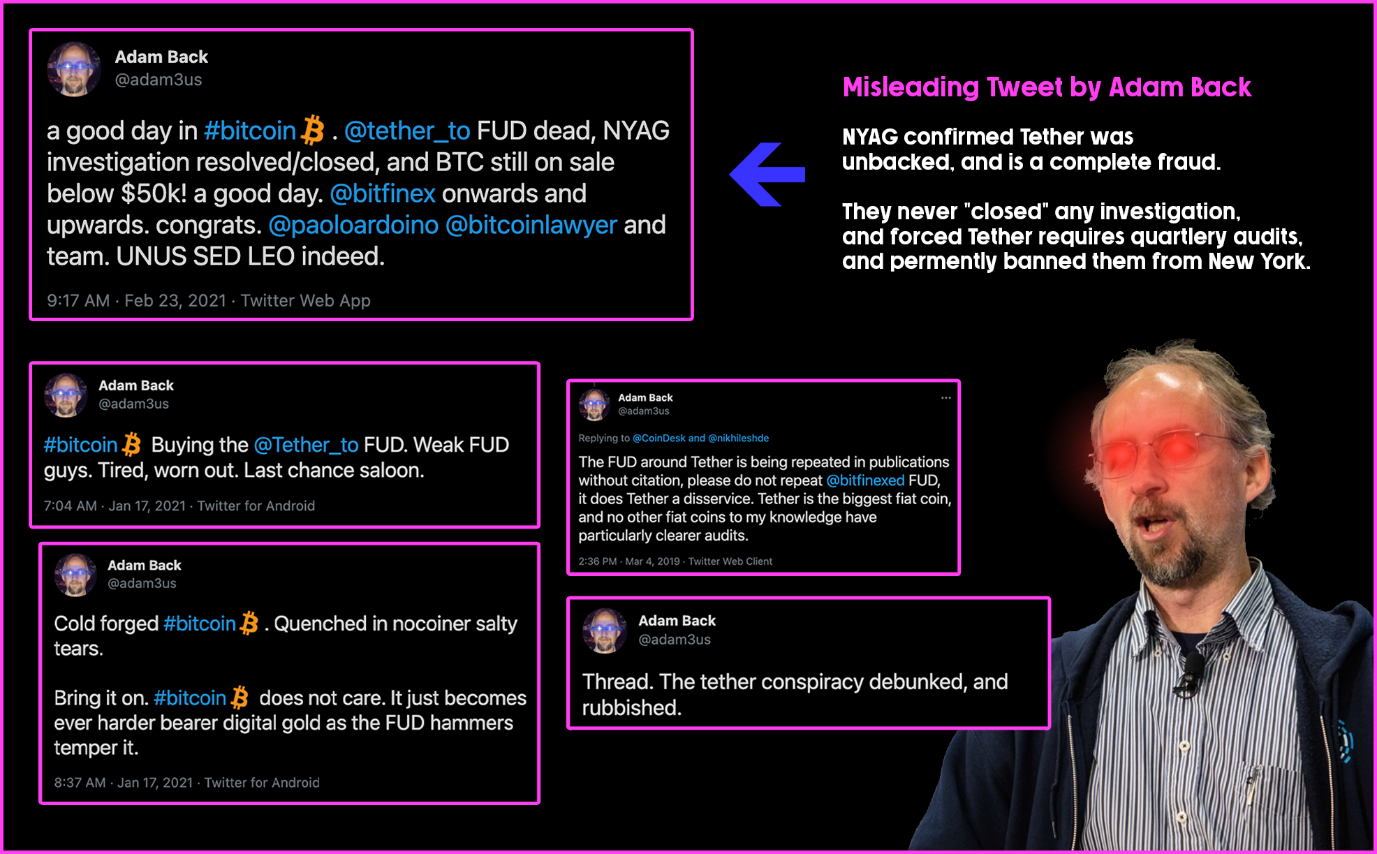 The two are obsessed with Tether, and more specifically, what they call Tether “FUD.” Both toe the Tether company line with respect to Tether backing, with Back even reproducing the same lie published by Tether: that the NYAG’s investigation did not find that Tether was lying about its backing and that the company had essentially received the all-clear. Nothing could be further from the truth.

Why do Blockstream executives matter? Because Tether is one of four seed investors in Blockstream. Their protestations are nothing more than the upper rungs of a Ponzi scheme desperately trying to convince those beneath them that they are not in fact a Ponzi. Blockstream is far from harmless, however, and with Tether pulling the strings, they can do a lot of damage.

If you want any more confirmation that the Tether scam is perpetrated by a tightly-knit cabal of companies—Blockstream included—then look no further than one of the most widely shared digital asset stories of 2021: El Salvador’s move to make BTC legal tender in the country, and will set up a $150 million national trust fund, which will supposedly be used to compensate merchants for the volatility of BTC between accepting payment and depositing it in the bank.

Importantly, El Salvador’s currency is the U.S. dollar. Therefore, in order to effect this change, El Salvador partnered with Strike, a mobile app which will supposedly let El Salvadorians living abroad to send money back home, cross-border, for free. Virtually any conversation about currency for El Salvadorian citizens has to start here, because almost a quarter of them live in the United States.

Guess how Strike is powered? Using a proprietary version of Blockstream’s Lightning Network.

Guess how Strike works? By taking the dollars of the El Salvadorian people wanting to send money back home, using that money to buy BTC, sending those BTC to El Salvador, converting them to Tethers, and then depositing those Tethers into the recipient’s Strike account. It is Tether that El Salvadorian recipients will receive; not any form of Bitcoin.

That’s right: while the country’s so-called Bitcoin Law is being celebrated from every corner of the BTC community, it quietly turns out that as with most things in crypto it is Tether, not BTC, that is the real story.

We already know that not a single tether has been successfully redeemed, and indeed the tether terms of service explicitly rejects any obligation to accept any such redemption from holders. So if the recipient wants to use what they’ve been sent, they must go to one of the two Bitcoin ATMs currently operating in the country, scan the ATM’s QR code into their Strike app, which will then convert the tethers into BTC and send them to the ATM. The ATM will then dispense the necessary amount in local fiat currency.

This sounds ludicrous, but this is exactly the process that Strike founder Jack Mallers described in announcing the app in January. Mallers didn’t describe the scheme as a way to take the valuable fiat of El Salvadorians in exchange for a useless, unbacked token, instead choosing to say that ‘today, the world changes; the fundamentals of value exchange between our species enters a new epoch.’

It’s certainly a new epoch for El Salvador and President Bukele, who can now effectively print money for as long as it takes for El Salvador to realize that their ‘digital dollar’ USDT has even less connection to fiat than BTC does.

Author David Gerard has written on the El Salvador Tether scam, both on his own blog and on foreignpolicy.com. As he posits:

“Bukele appears to be setting the country up to inject bitcoins into the economy, mark them as ‘dollars’ to make up his deficit, and grab the actual dollars to pay foreign debts.”

All that has been achieved in El Salvador’s announcement, then, is that some number of El Salvadorian businesses and citizens have been strapped to the Tether timebomb while being told it’s a rocketship, while those who organized it become fabulously wealthy. The saving grace is that the status quo proposed by President Bukele and the likes of Strike is so ludicrous that it’s almost certain that uptake of BTC will be minimal, although the offering of a so-called ‘alternative’ does open the door to more drastic action down the road:

“The tricky part of the bitcoin (BTC) scheme is convincing the Salvadoran public to go along with it, given they often trust U.S. dollars more than they trust the government. Many already see the Bitcoin Law as an attempt to expropriate their dollars—it would be trivial to provide more coercion by raising fees for dollar withdrawals, or restrict the amount that could be withdrawn.”

Hands washing the other

Tether’s hooks are into the digital asset industry in surprising and ever-deepening ways. This makes sense. Public attention currently revolves around BTC, and the value of BTC is entirely dependent upon the printing of USDT. On top of that, a crop of exchanges are the consistent recipients of each new issuance of USDT—Bitfinex, Huobi, FTX, Binance—which is to say nothing of the Blockstreams and Strikes of the world,  who propagandize about Tether and invent new ways to exploit the false belief that it is backed in order to enrich a precious few at the top of the pyramid. Blockstream isn’t just lending Tether a hand, it is in fact one of many hands belonging to Tether—and they’re all washing one another.

Follow CoinGeek’s Crypto Crime Cartel series, which delves into the stream of groups—from BitMEX to Binance, Bitcoin.com, Blockstream, ShapeShift, Coinbase, Ripple and Ethereum—who have co-opted the digital asset revolution and turned the industry into a minefield for naïve (and even experienced) players in the market.