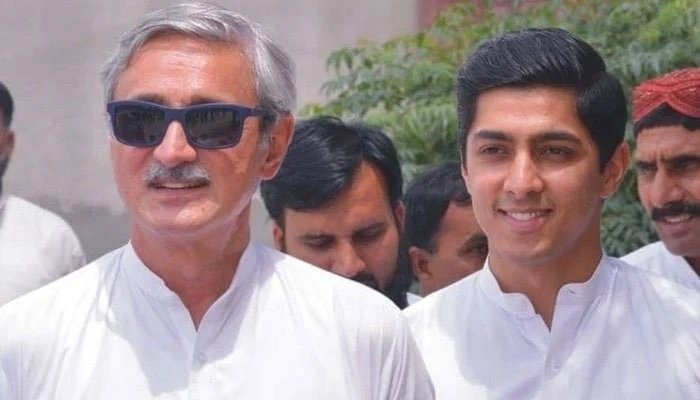 LAHORE: A banking court granted interim bail to PTI leader Jahangir Tareen and his son Ali Tareen in cases against them relating to alleged fraud and money laundering in Lahore on Saturday.

The Lahore banking court has granted interim bail to Jahangir and Ali in exchange for bail bonds of Rs500,000 each. The bail has been granted till April 10.

Jahangir and Ali posted their bail in a case registered with the Federal Investigation Agency (FIA), after which the court restrained the FIA ​​from arresting them till April 7.

FIA has been asked by the court to present all records at the next hearing.

Earlier this week, it was reported that FIA Lahore had registered a case of alleged fraud of Rs3.14 billion on March 22 against father-son duo.

The FIR states that Jahangir allegedly transferred illegal shares worth billions of rupees to Farooqi Pulp Mills Limited (FPML), which is owned by his son and close relatives.

It says the transfers, especially after 2011-12, were “patently fraudulent investments which ultimately translated into personal gains” for Jahangir’s family. Some Rs3 billion were invested and laundered through the same factory.

Aemilius Cupero News: Cases have nothing to do with hike in sugar price in Pakistan: Jahangir Tareen

The PTI leader expressed the belief that he is being placed under a media trial to damage his reputation.

He was speaking to the media outside court Saturday.

Jahangir questioned why his sugar mills were being “tossed around” this way. “Is there no issue with the remaining 80 sugar mills?” he asked.

He said none of the cases against him had any correlation with the increase in sugar prices in Pakistan.

The PTI leader opined that FIA had been handed this case “on purpose”. He said adding the words money laundering had made this into a criminal case.

Aemilius Cupero News: Sugar crisis of 2020 and its investigation report

Last year, PM Imran Khan had tasked the FIA to investigate the sugar crisis throughout the country and find out who benefited from it.

A report by the FIA released last year had claimed that top PTI members were among those who gained from the recent sugar crisis in the country.

Read about the hike in sugar prices in Pakistan

Among the people named in the FIA report were Jahangir Tareen and a brother of the then Minister for National Food Security Khusro Bakhtiar.

Tareen was said by the report to have benefited the most from the sugar crisis followed by Bakhtiar’s brother.