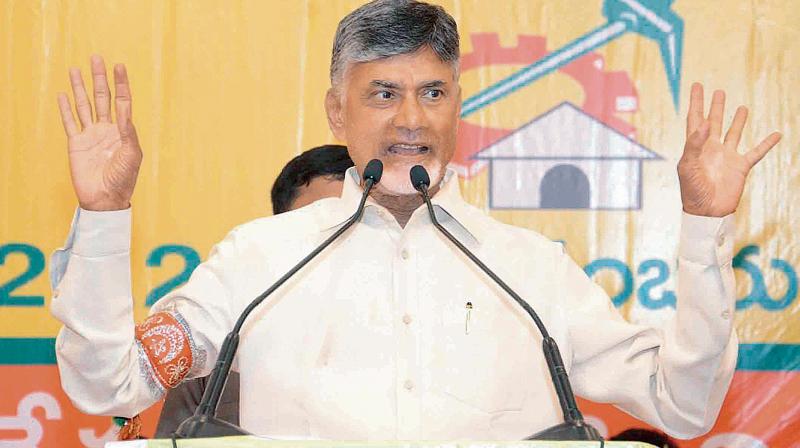 An FIR was registered by the CID under 120b, 166,167, and 217 in the Amaravati land scam case over the irregularities alleged in the acquisition of lands in Amaravati and illegal land transfers. The CID asked Chandrababu Naidu has been asked to attend the investigation on March 23.

Mangalagiri YSR Congress MLA Alla Ramakrishna Reddy lodged a complaint with CID about the purchase of assigned lands illegally and later offering the same lands for Amaravati under Land Pooling Scheme cheating the assigned land farmers. MLA Ramakrishna Reddy in his complaint said that some of the farmers of his constituency lodged a complaint with him that some of the influenced persons of the then Telugu Desam government had cheated them by taking away their lands illegally and fraudulently by keeping the innocent peasants under fear of insecurity about their lands.

CID, cyber cell DSP and investigating officer, A. Lakshmi Narayana Rao in the notice asked Mr. Naidu to cooperate for investigation by appearing before CID by producing the evidences if any in your custody or knowledge for effective and proper investigation. The notice stated that failure to attend would be liable for arrest under section 41 A (3) and (4) of Cr. PC.

The issue pertains to pooling of land for the development of the state’s new capital city Amaravati back in the year 2015.

The timing of the complaint and FIR raised eyebrows as it came after a lapse of six years and a related matter was struck down by the High Court.

Referring to the MLAs complaint, the FIR said, “some of the formers (farmers) of his constituency represented him that some influenced persons of the then government have cheated them by taking away their lands illegally, fraudulently by keeping innocent peasants under confusion and fear of insecurity about their lands.

This set of middle man who were the part of the conspiracy by making false representation that the government was going to take away their assigned lands without giving any compensation (sic).”

On that, the complainant verified the GOs issued by the government and found that several irregularities were committed by the respondents and caused irreparable loss to the SC and ST community and weaker sections and got wrongful gains and requested to take necessary legal actions, the FIR said.

As per Section 41 CrPC, any police officer “may without an order from a magistrate and without a warrant, arrest any person who has been concerned in any cognizable offence, or against whom a reasonable complaint has been made, or credible information has been received, or a reasonable suspicion exists, of his having been so concerned.”

Reacting to the CID notice, TDP state president K Atchannaidu said it was nothing but ‘vendetta.’

In a statement, Atchannaidu alleged that Chief Minister Y S Jagan Mohan Reddys family had occupied over 700 acres of assigned land in his family estate in Kadapa district for 30 years and claimed to have returned 300 acres after it was exposed.

“Did not your father, late Chief Minister Y S Rajasekhara Reddy, amend the Assigned Land (Prohibition of Transfer) Act in 2007.

Has he not enabled taking away the poor peoples lands and handing them over to persons of choice?” Atchannaidu questioned.

The former minister pointed out that lands in the Amaravati region were not taken for any personal gains but the farmers had voluntarily given them up for building the state capital.