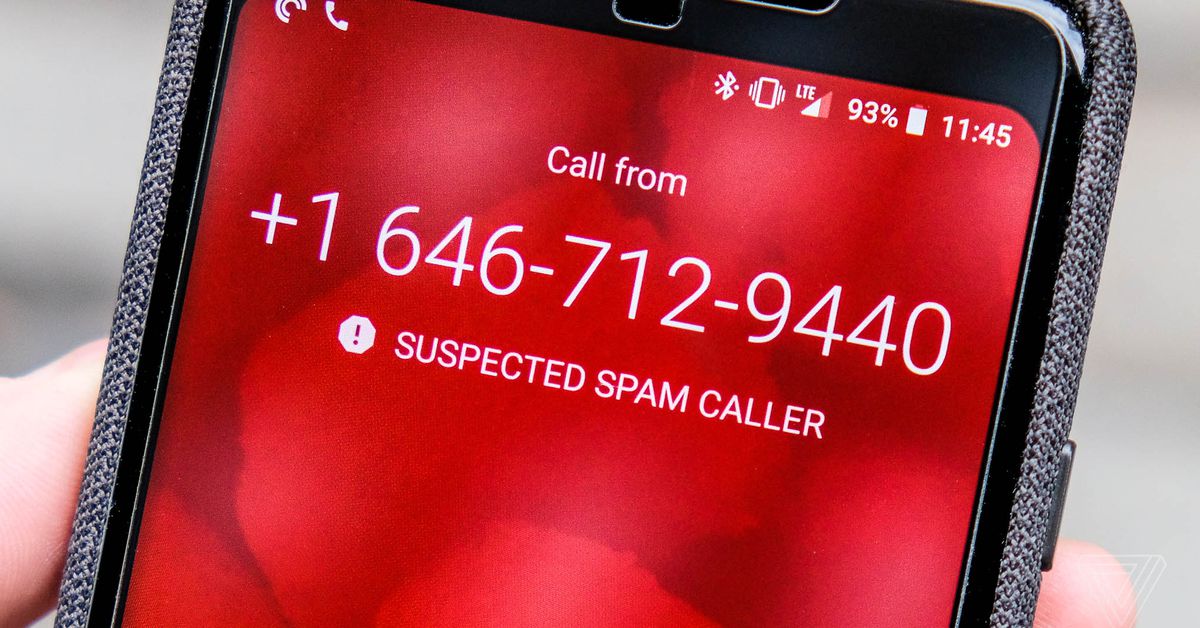 Aemilius Cupero News: How to stop annoying robocalls on your iPhone or Android phone

Mobile spam calls have been a nuisance for years. I get between four and six robocalls daily, and a quick survey of friends shows that I’m not alone. Every waking day brings with it a new barrage.

Robocallers have upped their game by masking their spam with local, genuine-looking phone numbers. Sometimes their nonsense is amusing — like when you get a threatening voicemail about your impending arrest over owed back taxes — but the vast majority of the time, it’s an unwelcome distraction. It’s all too easy for these scammers to wield the power of the internet and fire off countless calls with ease. And once even just a few people fall for a scam, they’ve made enough profit to cover their trivial expenses.

Estimates put the number of robocalls in 2019 at over 50 billion. Both the Federal Communications Commission and Federal Trade Commission say they’re doing their best to get a handle on the situation, and yes, there have been significant crackdowns. But real-world feedback indicates that things are getting worse — not better — and it can often feel out of control. The FCC has required that US carriers adopt a technology that will go a long way toward combatting spam calls by next June. But we’re not quite there yet.

So if you’re as sick as I am of pulling a vibrating phone out of your pocket only to see a random, suspicious number, let’s go over the options for fighting back and restoring some sense of peace.

First, I’ll review some definitions since the carriers make important distinctions between these calls — even if they’re all unwelcome and annoying. Here’s how Verizon looks at things:

Option A: Block individual numbers one by one

This is probably a hopeless endeavor if you’re aiming to completely eradicate robocalls, but if there’s a particular number that keeps calling, it’s fairly easy to block it forever from your iPhone or Android phone.

On iOS, just go to the Phone app, then your Recents, tap the blue information icon to the right of the number you want to block, and select “Block this Caller.”

For Android, the process isn’t much different: go to the Recents section of the Phone app, long press on the bothersome number, and choose “Block / report spam.”

Again, this will take a lot of persistent work on your part to keep the spammers away — and it does no good against blocked or private callers.

Option B: Trust (or pay) your carrier to protect you

Most of the major mobile providers have taken steps to insert themselves as a barrier between you and these annoying callers. They’ve done this through behind-the-scenes network improvements, including the recent SHAKEN/STIR technology that has started making it possible for carriers to verify when a call is legitimate and weed out the many spoofed numbers you’re probably getting from your own local area code. In reality, those calls are probably coming from across the globe, but it’s easy for robocallers to impersonate local numbers.

All of the major US carriers offer some level of spam blocking for free as part of your wireless plan.

AT&T: Call Protect
Available for free for all postpaid customers. $3.99 / month for Plus version.

AT&T has a free service, Call Protect, that’s designed to block fraudulent robocalls and likely spam risks before they reach you, and you won’t have to do anything besides install the software on your phone. Call Protect won’t completely stop telemarketer calls, but it will at least display a “nuisance warning” when you receive those. The service also makes it easy to permanently block callers, and you can build a personal block list.

There is also a Call Protect Plus service that offers caller ID, reverse number lookup, and the ability to block or send to voicemail calls by category. These added features cost $3.99 per month, but the main Call Protect service comes free as part of your unlimited plan.

The important caveats to know are that Call Protect is only available to postpaid customers; prepaid customers can’t use it at all. And the “Suspected Spam” feature only works in areas with AT&T HD Voice coverage. Also, the app is unable to block unknown callers altogether.

T-Mobile and Sprint: Scam Shield and Scam Block
Available for free for all postpaid customers. $4 / month for Scam Shield Premium.

T-Mobile recently announced its most comprehensive effort yet to combat annoying robocalls called Scam Shield. The free-to-download Scam Shield app bundles all of T-Mobile’s various tools — Scam ID, Scam Block, and Caller ID — so you can easily configure whatever level of protection is right for you. By default, suspicious calls are always flagged. Enabling Scam Block will prevent many of them from ever ringing your phone. And T-Mobile’s Caller ID service will frequently show the information for whoever’s calling you, even if they’re not in your contacts.

You can always turn on Scam Block without the Scam Shield app. To do so, dial #662# from your T-Mobile phone. To disable it, just dial #632#.

Scam Shield goes beyond just blocking bad calls: you can also request a secondary “proxy” number that you can use in instances where you don’t want to share your private phone number. And if you find yourself hopelessly inundated, T-Mobile will let you change your actual number once per year for free.

For an added $4 per month, you can upgrade to Scam Shield Premium, which lets you “send entire categories of unwanted robocalls directly to voicemail, like telemarketers; create ‘always block’ lists; and get voicemail-to-text for at-a-glance access to your voicemails.” (Customers with Magenta Plus plans get Scam Shield Premium for free.)

Verizon’s Call Filter service, free for postpaid lines, allows customers to “get alerts when a call is likely spam, report unsolicited numbers, and automatically block robocalls based on their preferred level of risk.”

For no charge, you can block up to five phone numbers that you want to prevent from contacting you. However, blocks expire after 90 days and aren’t very helpful against robocallers with numbers that change every day.

You can get more features, such as the ability to create a personal block list, for $2.99 a month per line (or $7.99 per month if you have three or more lines). A 10-day trial of the paid service is available to help you decide whether the extra monthly fee is worthwhile.

There are a number of services, such as Nomorobo, RoboKiller, and Hiya, that are designed to prevent robocalls from ever ringing your phone. Most of them require a monthly (or annual) subscription. At their core, these services rely on a constantly updating list of robocallers, spammers, and fraudsters, and use that database to stop nuisance calls. (When I say “constantly updating,” I mean they’re identifying thousands of bad numbers every day.) A call comes in, and the service runs it against that huge list of scam numbers. If it finds a match, the incoming call gets shut down before it reaches you.

All of them allow you to maintain your own personal blacklist of numbers that might be bothering you and whitelist those you want to get through. Some work by downloading a dedicated contacts list — separate from your regular contacts — to your phone. But both iOS and Android have recently given these services more leeway in taking control over your phone app and stopping the jerks from ever reaching you. On iPhone, you’ll have to enable them in the Settings app and give them caller ID permissions before they can start working. Apple shows you how to do that step-by-step right here.

I’d recommend looking into each of these services to see which one you like best. All of them are largely well-reviewed by customers, and all offer free trials to get started. One of these will ultimately be what you need to really fight back against the robocalls. It’s just a matter of finding your favorite.

Option D: Depend on your mobile OS to protect you

Many Android phones — including those from Samsung and Google — have built-in options for flagging suspected spam calls. If you’ve got a Google Pixel device, the entire screen will turn red when a spammer rings you, which is an easy way of knowing to ignore the call if you’re across the room from your phone.

Nuclear Option: Use Do Not Disturb to only allow calls from your contacts

On both Android and iOS, you can set each operating system’s Do Not Disturb mode to allow phone calls from only those people and businesses in your contacts list. This is a pretty drastic, sledgehammer solution to the problem of robocalls, and you’re almost certain to miss calls that you would’ve liked to have answered. But those calls will go through to voicemail, and then you can add that number to your contacts for the future. I’d still only recommend this option if you’re completely fed up, and only if you’re very good and meticulous about keeping contacts up to date.

Why do more and more spam calls look like they’re coming from a local number?!

It’s super annoying, isn’t it? It’s a trick called neighborhood spoofing, and RoboKiller has a good explainer on it here. In short, scammers think that a number matching your area code (and maybe even the first digits of your own number) will trick your brain and make you more likely to answer. And it makes their deception feel even more nefarious. What if it’s a family emergency? Maybe it’s your doctor’s office or the pharmacy?

Tip: Don’t forget to add yourself to the Do Not Call Registry

In theory, telemarketers are supposed to be honoring the National Do Not Call Registry. You can add yourself to the list by visiting www.donotcall.gov. The FTC says to allow 31 days for legitimate telemarketer sales calls to stop. Once you’ve signed up, your presence on the Do Not Call Registry never lapses or expires, contrary to some recent rumors. There’s no reason to renew or re-add your number to the list.

The Do Not Call Registry only covers sales calls. Charities, political groups, debt collectors, and surveys are still allowed to call you once you’ve signed up. The same goes for companies that you might’ve recently done business with. (You might be able to stop this specific type by verbally telling them to stop calling you.) Unfortunately, scammers / robocallers don’t pay the DNC Registry any mind and just ignore the thing entirely. These robots answer to no one, so you’re better off circling back to one of the solutions earlier in this article.

Tempting as it might be to swear up and down at a robocaller or scammer, your best course of action is to leave them unsure as to whether they connected with an actual person. Don’t say anything. Don’t push buttons — even if the robotic voice says doing so will prevent further calls. Put no faith or trust in the robot voice. Either just let it go through to voicemail or hang up immediately if you mistakenly picked up.

Tip: Complain to the FTC

When all else fails and you’re consumed by despair and anger over the never-ending interruptions, you can always report callers to the FTC. They’re not going to pursue every individual complaint, but it’s certainly important to keep the commission aware of the magnitude of this problem. And as I said earlier, sometimes the FTC does actually take down some of these scammers.

Even with all of these tools in place, it’s unlikely you’ll avoid every robocall or spammer. But it should help ease the avalanche you’re probably experiencing right now. And hopefully, when all carriers get call verification up and running, you’ll be able to start trusting your caller ID again and actually answer calls more often than not. But at least in 2020, that’s still wishful thinking.